BEXLEY GRAMMAR SCHOOL PERFORMING ARTS
This year’s cast featured a wide range of ages from Year 9 up to Year 11 all of whom have dedicated a great deal of time and effort to the performance.  Since the last academic year, the cast have been working hard under the guidance of Ms Palmer and Miss Bartlett and came together to create a captivating and enthralling piece, performing one of Shakespeare’s most famous plays telling the story of a ship which is hit by a fierce storm. The crew, all thought to be dead, end up on a mysterious island far away from their desired Naples. 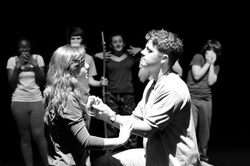 The hard-hitting play enthralled the audience with an extremely high level of acting performed by the cast looking like a professional theatre cast.  They performed as a fantastic ensemble, with all performers switching from Kings and Dukes to spirits, wind, and members of an unseen army. The actors dazzled the audience taking them on a breath-taking journey making a challenging script look so easy and representing the school in an outstanding fashion. We were also proud to have supporting us the production team, consisting of three drama prefects who assisted in the direction and ran the performance and two Year 10 boys who did an amazing job with the lighting for the performance.

Overall the cast and crew put on the performance of a lifetime that was incredible to watch and to be part of, so well done to all of the cast, production team, tech team and directors for putting together such an awesome performance.
George Fuller, Year 10

Below you can watch a video of the dress rehearsal, sorry about the quality- it was filmed on a low definition camera which was overwhelmed by the stage lights.