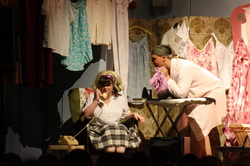 A review by the show's director, Miss Swadkin:

I first realised quite how popular a choice ‘Hairspray’ had been for this year’s school musical production, when over  150 students turned up at our open dance audition last November. This was probably three times the number who had auditioned the year before, and the biggest problem for me was that everyone was really good! For the first time ever, we had to turn people away from the production, simply because it was not possible (or safe!) to fit 150 people onto the stage in the  school hall. That initial audition process was the start of something really special. The six months spent rehearsing the show has been exhausting, but always uplifting. Sometimes at the end of a long week, running a 2 hour dance rehearsal after school on Friday seemed like an impossible task, but there was not one week when I didn’t leave uplifted and cheered by the cast’s energy and commitment to this show. 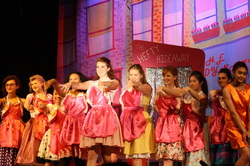 I am so proud of everyone who was involved in the show, not only my enormous cast, but also the band who sounded more professional than ever (you know they have done a superb job when you take the music for granted and do not notice that it’s a band of students), the lighting and sound crews, the Year 12 Backstage crew who threw themselves into the spirit of the show with enthusiasm and Hayley and her team who provided the American 1960s-inspired interval refreshments.  It is not just the students who contributed however: the Finance Office organised the sale of tickets (which was a mammoth task considering how many were sold!), the Site team were amazing and of course, the wonderful Dream Team for their help with the production itself (Mrs Snelling, Miss Fisher, Mr Asker, Mrs Purdom). Without them, this show would not have been possible. 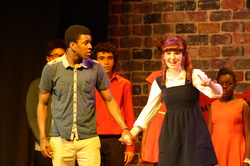 This year there were two ex-students who contributed hugely to the success of the show: Robyn Snelling, whose creative input into the scenery and props was invaluable, and Sam Haughton, whose professional dance and musical theatre training enabled us to lift our performance to a new high. It is a wonderful characteristic of this school that our ex-students are so willing to come back and so generously donate their skills and time.  Selling out all four nights of the show is, to my knowledge, a BGS first, and I am so pleased, because it felt as if last week was a real celebration of our show community’s hard work in the last few months.

Thank you to everyone who came and supported the show. Once we have recovered from the huge success, we will have to  start planning next year’s show!  Miss Swadkin, 10th July 2013