African slaves brought their musical traditions with them when they were transported to work in the North American colonies. Early types of African American music included spirituals (religious songs using vocal harmony) and work songs.
Work songs were sung rhythmically in time with the task being done. They used call and response in which phrases from a lead singer were followed by the others. African music combined with the folk music of the white European settlers to produce new styles of music.
The blues emerged towards the end of the 19th century. This early style of blues was known as country blues and was usually a solo singer accompanied on guitar or piano sometimes with added harmonica or drums. Well-known country blues musicians include Leadbelly, Blind Lemon Jefferson and Robert Johnson.
Almost every blues songs:The most common chord structure uses just 3 chords. A blues in the key of C (as we are doing) uses the chords
C E G -  F A C - G B D.
​You will hold each chord for 4 beats - either you can simply hold the chord for 4, or you can make up a ​syncopated ​('jazzy') pattern to play the chords.
​Try using a drum beat on the keyboard to help keep you in time.
​In notation, it looks like this:

A simpler way to look at it is here: 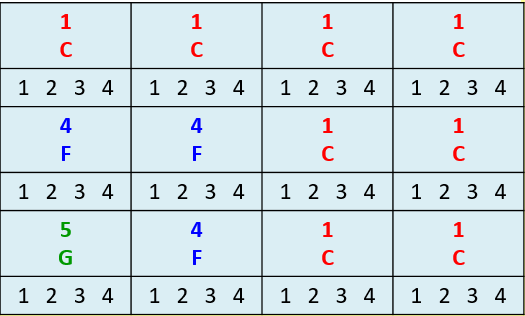